SMALLZY’S SURGERY LIVE FROM NEW YORK FOR THE RELEASE OF SUICIDE SQUAD In an Australian radio exclusive, Nova’s Smallzy’s Surgery will be broadcasting live from the Big Apple next week for the release of Suicide Squad, providing listeners with unique access to the all-star cast. From Monday 1 August, Smallzy will broadcast his national night show from New York City for a week of special shows featuring nightly interviews from the cast of Suicide Squad including Margot Robbie,

ILLY IN THE SURGERY

Melbourne rapper and chart topper Illy dropped by and gave legal advice to some fans in desperate need! I mean, he did go to uni and study law after all. 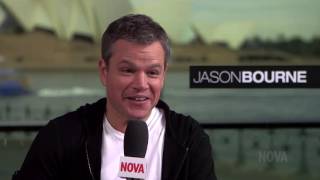 Arriving in Australia to promote the new Jason Bourne movie. Smallzy caught up with Mr Bourne himself, Matt Damon and the new leading lady Alicia Vikander. In addition to catching up with them on the radio show, Smallzy also hosted a 'world exclusive' Twitter QandA anchoring coverage of a fan event to an audience around the world.

Zac Efron is in Australia to promote his new movie with co-star Adam Devine. The boys caught up with Smallzy and revealed some of their dating do's and don't!